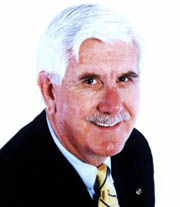 Richard J. Glassock, M.D., M.A.C.P., is one of the most eminent physicians in the field of nephrology and Emeritus Professor of Medicine at the Geffen School of Medicine at the University of California at Los Angeles. Glassock received his Bachelor of Science in Pharmacy (summa cum laude) in 1956 at the University of Arizona, Tucson. He then attended Duke University School of Medicine in Durham, NC, in 1956–57. Glassock received his M.D. with highest honors from UCLA in 1960. After interning at UCLA, he held a fellowship in nephrology at the Peter Bent Brigham Hospital in Boston as well as research fellowships at Harvard and Scripps Clinic. Glassock is certified in internal medicine and nephrology as a physician and surgeon.

Glassock was born February 4, 1934, in San Bernardino, CA, and is married to Jo-Anne. They have four children: Ellen, Scott, Sharon, and Mark.

Chairman, Intersociety Council for Research of Kidney and Urinary Tract, 1990–1992