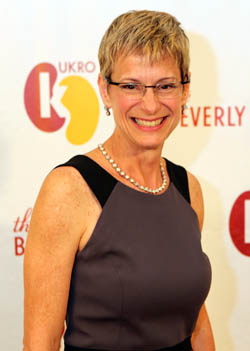 We were shocked and saddened to learn of the tragic loss of our good friend, Elizabeth Garrett, who passed away from colon cancer at age 52 on March 6, 2016. During her tenure as USC Provost and Senior Vice President for Academic Affairs, she worked to strengthen the partnership with UKRO and USC, and in 2014, we honored her with our Extraordinary Achievement in Academic Leadership Award. As the university’s second-ranking officer, Beth was responsible for a sustained effort to hire cutting-edge faculty members, particularly in the fields of the neurosciences, the humanities, and the social sciences and was passionate about invigorating USC’s research environment. As our president Ken Kleinberg noted in 2014, she had “…a tireless commitment to building the University of Southern California and to elevating its position in the pantheon of top American universities….Garrett has strongly supported UKRO’s efforts to make kidney disease a true center of excellence at the Keck School of Medicine, and for this we and all who battle kidney disease are grateful beyond words.”

Elizabeth Garrett was an incredibly brilliant lawyer (at one time clerking for Justice Thurgood Marshall on the U.S. Supreme Court). In 2015, she became the first female president of Cornell University, and even in the short span of eight months, she left a lasting legacy there. This dedicated leader will be remembered for her commitment to education and public service, her intellect, energy, and vision. She was a true trailblazer, and this country’s intellectual and academic landscapes are vastly poorer for her loss. She will be deeply missed.