My uncle Bob passed away in 2010, just before his 64th birthday, due to complications of diabetes and kidney disease; he suffered a heart attack and stroke and although he seemed to be on the road to recovery, he finally succumbed to a number of deadly hospital infections. 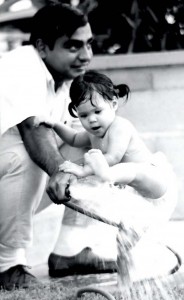 My uncle and me

He was a man of service, an Air Force and Army Reserve veteran, and a Los Angeles police officer for 27 years. I hope that by sharing his story here – raising awareness about diabetes and the risk of kidney disease – he will continue to help save more lives. He would have liked that.

He first became aware of his diabetes when his eyesight began to fluctuate and he developed an unquenchable thirst. He must have battled diabetes for at least 20 years. A back injury on the job made that battle harder since it was practically impossible for him to do any kind of exercise except walking – so frustrating for an active man who had once been an avid runner.

Around 2008, his doctors told him that the years of diabetes had finally taken their toll on his kidneys. They delayed dialysis as long as they could and his family wondered if he could be a candidate for a kidney transplant. Because of his weight, transplantation wasn’t a realistic option. He finally chose PD (peritoneal dialysis), which he could do at home. He seemed to be coping and I believe dialysis made him feel better; but juggling a diabetic diet and a kidney diet when you love food is hard and I know he got depressed sometimes.

It was a shock to the whole family when Uncle Bob entered the hospital in the summer of 2010 and we found out he had had a heart attack and stroke. With all we thought we knew about diabetes and kidney disease, we didn’t realize he could have heart disease, too. Of course, now I’m always finding articles about cardiovascular disease associated with diabetes and kidney disease. It just shows me how important it is to learn all the facts.

Every year, I see so many more stories about diabetes, especially during Diabetes Awareness Month every November. I’m grateful there are celebrities out there like Nick Jonas and Billie Jean King sharing their experiences about diabetes, and in Nick’s case, educating a whole generation who might never have thought about the disease otherwise.

So I’m hoping Uncle Bob’s story inspires others to think, learn more about diabetes and kidney disease, take control of their health, and get the word out.

If you would like to read more about my uncle, please check out my Diary of a Kidney Lover blog post about him.